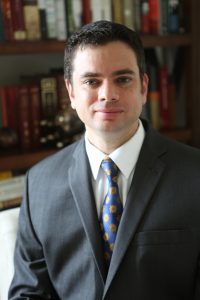 Benjamin Davidson was born and raised in Los Angeles. He is a graduate of UCLA and Cornell Law School.  At Cornell, he made the Dean’s List, was selected as an Honor’s Fellow for Cornell’s Legal Writing program for two years, became Managing Editor of the Cornell International Law Journal, and he was the first in his class to have a Note selected for publication by the Cornell International Law Journal. A fluent Spanish speaker who lived and worked in Costa Rica before attending law school, Benjamin also served as Academic Chair in Cornell’s chapter of LALSA (Latin American Law Students Association) and represented an asylum applicant in Cornell’s Asylum and Convention Against Torture Clinic.

In June 2010, he “put on the white hat” and founded the Law Offices of Benjamin Davidson, P.C., a solo practice dedicated to representing employees in relation to a wide variety of claims arising in the workplace, including discrimination, harassment, wrongful termination, pregnancy leave, breach of contract, and wage and hour claims. He has frequently also represented high-level executives and public officers in severance negotiations, obtaining six- and seven-figure settlements on behalf of his clients.

Although Benjamin’s main practice is in representing employees, he also assists employers from time to time in providing advice and counseling and ensuring compliance with California and Federal employment laws and regulations. He also partners with other established firms in a number of employment matters.

Benjamin Davidson is licensed and admitted to practice in all courts in the State of California and in the Eastern, Northern, Central, and Southern District Courts of California.

He has served as a member of the executive committee of the Beverly Hills Bar Association and was named a “Rising Star” by Superlawyers Magazine in 2015 and 2016.

Benjamin is fluent in Spanish and conversational in Hebrew.